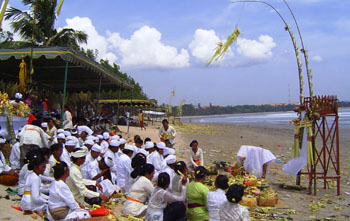 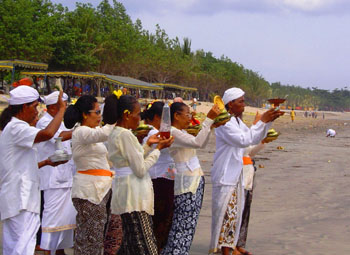 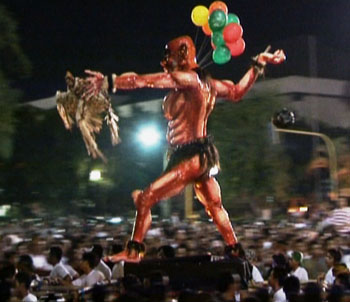 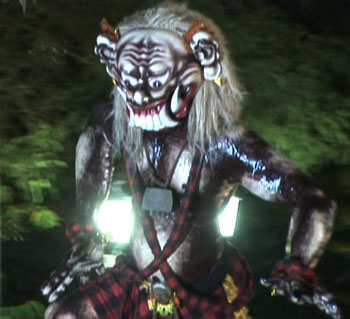 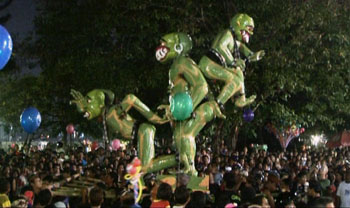 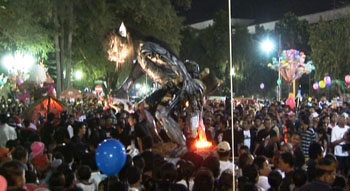 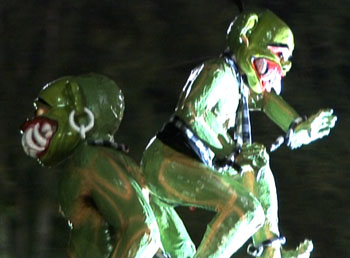 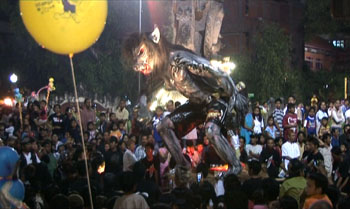 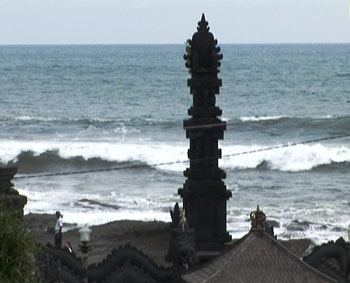 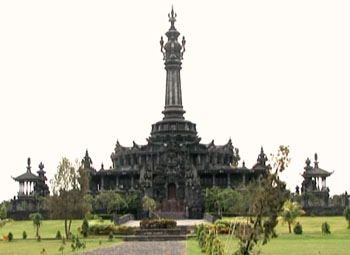 Indonesia is the largest archipelago in the world (a country made up of a collection of islands), it also has the largest Muslim population in the world. Bali is one of those islands and an anomaly; it is unusual because it is predominately populated by Hindus who have their own slant on the religion.

I had been invited by a friend of 30 years Ross, who is an Englishman and has a home in Bali. Through his connection of friends, I was able to learn about the culture and see so many wonderful things.

During my stay in March 2006 I observed two local practices and beliefs that are unique to Bali the first being Ogha Ogha and second Nepi Day. Months before Ogha Ogha day, the local people, local societies, youth clubs, colleges etc. build their Ogha Ogha’s. This entails an effigy, in the form of devils, animals or other mystic creatures painted in very bright colours constructed on individual frames of bamboo; each raft varies in size many are 10 metres long and 5 metres wide and are carried by as many as 40 to 50 people. They are paraded through the streets in a carnival procession accompanied by traditional Balinese music featuring hundreds of drums, cymbals and bells etc, the atmosphere is absolutely electric.

The day before the carnival procession I went to the capital Dempasar, and with the help of 2 local people decided that a certain roundabout would be the best place to set up my camera and tripod. It turned out to be a brilliant vantage point.

The procession started as dusk was falling, thousands and thousands of people lined the streets charging the atmosphere with excitement and anticipation. The noise of the crowd was fantastic with cheers and screams that were electrifying. The people roared if an effigy collapsed or broke because these rafts were shaken, rocked and lifted like a wave as the people carrying it energetically danced along the crowded streets. Sadly it was all over by 10 pm. We made slow progress on the way home, thousands of people and effigies meandered their way back to villages as if they had all the time in the world. This was not the case as we all had to be off the streets and at home by midnight!

Ogha Ogha is a ritual to pacify the many devils and evil spirits that live close to our world by giving them a celebration on this day every year. The idea is to appease these negative influences so that they don’t disturb the island, the people or the energies of Bali as the next day is the most important day Nepi Day.

Nepi Day is the Hindu New Year, but the Balinese practice it in the most unique way. They give the whole of their island to the spirit world. So from midnight after Ogha Ogha to 6 am some 30 hours later, nobody is allowed on the streets. Every single person has to remain in doors, even the tourists have to stay within the perimeters of their hotel or accommodation. The only exception is if anyone is taken ill and they need emergency treatment. They have what they call Nepi Day police which are local village elders and they patrol the streets to make sure this rule is abided by. There are no taxis, no buses and even the airport closes for 24 hours. In the house you are not allowed to listen to the radio, television, or make meals. The intention is for everyone to sit in quiet meditation and allow the spirit world to roam freely over the whole of this amazing island. You may now understand why they attempt to appease devil and negative spirits etc. the night before as they only want good pure and loving spirits close to them.

Many non-Balinese leave the island for several days every year during this period as the spiritual holiday continues for several days; however I found it the most amazing time and a privilege to experience.

Late morning Nepi Day, I felt was the right time to sit outside in the shade and connect to my spirit team. I had one of the clearest and most wonderful meditations to date. It was so clear and pure and there was absolutely no disturbance from anywhere on the island. This experience lasted approximately two and a half hours and I shall never forget it. The fascinating thing is that simultaneously in Cyprus Geraldine, who is a healing medium with whom I work very closely with, had exactly the same experience. It was very early in the morning in Cyprus when Geraldine was woken by her guide and she entered a beautiful deep meditation. It felt for both of us that we had our whole soul group together with us sharing and enjoying the experience.

Each and every one of us is connected to a group of souls who I believe are more strongly connected to us than our physical families. I have been with them for thousands of years. We grow, we learn, we help each other. I feel a great responsibility to stay on my life’s path as much as humanly possible as my success is their success, my failure is their failure and so it is for all of us. Soul groups vary dramatically in size, once you understand and know that they are there, this knowledge can give you strength and support in many areas of your life. (I am often referring to my spirit team; these can be healers, helpers, surgeons in spirit who are with me whilst healing. They are not necessarily part of the same soul group.)

At 6 am the day after Nepi Day the majority of local people make their way to the sea and build bamboo platforms to receive offerings of food and incense and construct large shaded areas with bamboo and coconut leaves. Every temple has its own place on the beach where its congregation gather together with Balinese musicians. The ceremonies will take several hours and when one temple group has finished, another which may be only 500 metres down the beach, starts. These ceremonies take place over the next two days. It seems like all the Hindu Balinese come to the beaches to pay their respects to the land, the sea and the air during this time.

With the help of a friend Budi I discovered a meditation group, through various phone calls and introductions and went to join them. The group consisted of about 16 people from different overseas countries and after the mediation I was talking to an Australian and I told him I had a strong sense to visit Australia. I had been away from home for more than 3 months by this point and had no further plans, but the urge to go to Australia yet again was very strong. We only had a short conversation but he unknowingly had a message for me and said “You should visit Byron Bay”. His statement immediately registered with me. I had been to Australia twice before and on both occasions I wanted to go to Byron Bay but for various reasons I never got there. My mind was made up, the next day I bought my Australian visa on the internet and a one way ticket and left for Sydney a few days later.